Hello! I kind of have a problem. I horde a lot of old video game magazines, and I don’t know why. I guess because as I get older, I like to go back to these relics every once in awhile to see how things turned out. I also need to justify the fact that as 23-year-old, I need to have a huge stack of video game magazines in my closet.

So, here we are. I think a good jumping-off point for this whole endeavor I am about to embark on is turning to one of my favorite issues of Electronic Gaming Monthly.

I think what makes this issue so interesting is when it was released. 2001 was a huge year for gaming. The Playstation 2 was a year into it’s next-gen dominance, and 3 more consoles were to be released by the end of the year.  Big games that defined that console generation were previewed and reviewed in this issue.

One of the first things that caught my eye was this gem in the Letters to the Editors section: 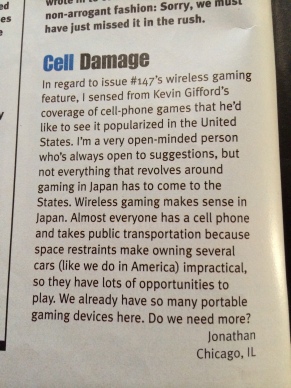 It’s crazy to see how much has changed in the past thirteen years. Mobile gaming has jumped to the forefront of the gaming world whether or not people like it or not. It’s much more convenient to whip out your phone and play games in short bursts compared to sinking 40+ hours into a epic RPG now-a-days.

Next, we move onto the Press Start segment on the magazine that features, “The Hottest Gaming News on the Planet.” One of the first bits of news that is talked about the pretty earth-shattering news that Capcom was going to bring the Resident Evil series exclusively to the GameCube. That included the remake of the original game, ports of three other games in the series, and two all-new titles. Capcom made good on their promise as the ports did come out to the GameCube, and the two new titles turned out to be Resident Evil Zero & 4. 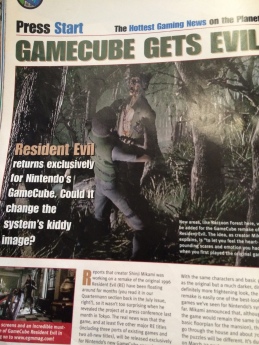 I initially thought that these screens looked pretty freaking rad. For me, the Resident Evil series holds a special place in my heart because my brother and I played the crap out of the series on the PlayStation. To find out that the series now has a home on the GameCube was a little disheartening because I only had a PS2 at the moment.

Next up is my favorite part in any video game magazine, and that is the rumor section. It’s the section in a magazine where imaginations run wild. Sometime these rumors turn out to be true, slightly true, wrong, and waaaaaaay wrong. This section is no different. 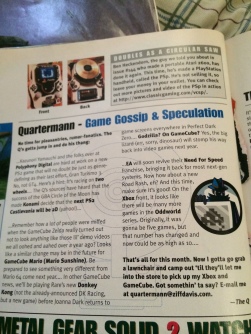 So much gold on this page.

Quarterman was right about Polyphony Digital making motorcycle racing game in some aspect. Tourist Trophy was released in 2006, but it was after they took their sweet time with Gran Turismo 4. That 2D Castlevania was the supposed to hit the PS2? It turned out to be 3D. As for Super Mario Sunshine, nothing much changed, I think. A Donkey Kong game did come out before Perfect Dark Zero, but it turned out to be Donkey Konga, not the proper Donkey Kong games fans wanted. The Need for Speed series did come back, though.

And what about that homemade PSp that was featured on the top? That would have been really cumbersome to play if Sony released their own PSP like that all the way back in 2005.

Next up is previews. EGM had previews for the PS1, PS2, Xbox, GameCube, Dreamcast (R.I.P. never forget), and the GameBoy Advance. There were previews for heavy hitters like Jax & Daxter, Grand Theft Auto III, and Kingdom Hearts. The previews sections wasn’t as packed as their massive Xbox and GameCube preview section. 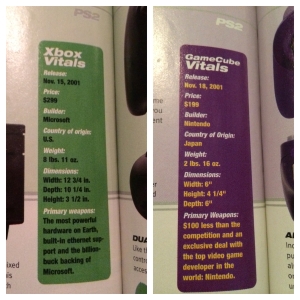 The tale of the tape. The Xbox was one fat baby.

Those prices are out of this world. $299 and $199 is insane. Can you imagine if the Xbox One and the Wii U was priced liked that? Everyone and their grandmother would have them in their living room. Looking at all the specs and everything else that came with it brings back warm, fuzzy memories for me. I remember sitting in my classroom just doodling various picture of the GameCube and Xbox and making lists of what games I wanted for both

When I did eventually get my Xbox, it came with the “S” controller, not that god-awful one that came with the initial launch. That thing was so uncomfortable. I also remember thinking that the GameCube controller looking really…interesting. Turns out it was extremely comfortable to hold in my hand.

Anyways, EGM previews a ton of games on both sides, and comparing the launch line-ups for both consoles. The Xbox had 20 games at launch compared to the GameCube’s 12. It’s interesting that they called Star Wars Rogue Squadron II: Rogue Leader the GameCube’s “killer app.” They also said that Super Smash Bros. Melee “Prettied-up rehash of the N64 original.” Those are some harsh words considering they later gave the game a 9.5 out of 10.

They also talk big about how great the obvious Nintendo first-party games are gonna be, with little-to-no mention of third-party support. It’s good to see that trend still applying to Nintendo to this day. At the end of the feature, they declare the Xbox the winner. The PS2 may have won that console generation, but the Xbox clearly finished it very strong while Nintendo fell to third place.

And here we are at the end of our long journey. Sorry for this post being so long, the issue clocks in at a massive 268 pages (though my issue is missing pages) so there is a ton to cover. Hope you enjoyed reading this. There will be more to come in the future.